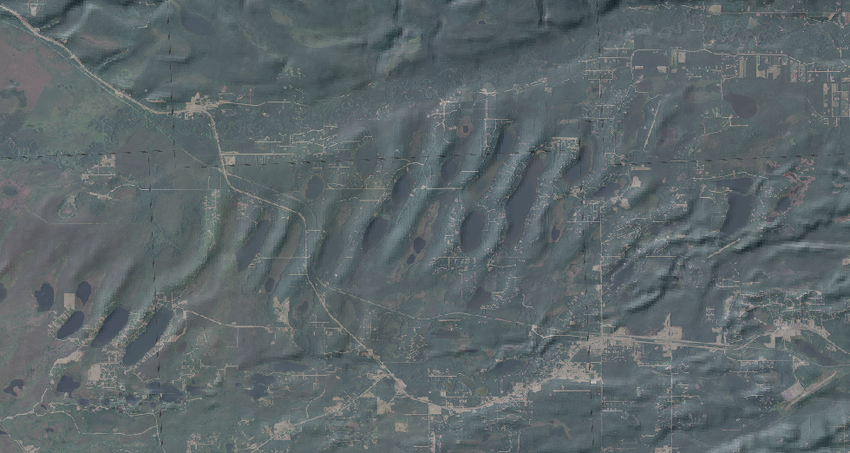 Range map showing the location of the VLD features, in the Matanuska Valley

VLD Trough wetlands (the Very Large Dunes of Weidmer et al 2011) are found only in the N-S trending valleys of the Meadow and Beaver Lakes Area. These uniquely arranged dunes were apparently created by gigantic waves (dunes can be formed by other processes besides wind) formed during a flood following the collapse of an ice dam that catastrophically drained Lake Atna. The 17 prominent VLDs are approximately 5 km long, and 800 meters crest-to-crest. Lake Atna was a 9500-square km lake formed in the Cooper River Basin near the end of the last glacial maximum (Wiedmer, et. al., 2010 but see the opposing view of Reger et al. 2011 and the response from Wiedmer et al. 2011). The VLD features have also been called ribbed moraine, and may have formed sub-glacially perhaps with later modification by sub-glacial flooding. They are currently mapped as Rogen moraine, but are no longer considered to be Rogen.

Many wetlands in VLD Troughs support lakes, the largest of which is 230 acre Seymour Lake. VLD Trough lakes are of relatively uniform depth; all of them are about 20 feet deep. Lakes are defined as areas of standing water greater than 20 acres (and deeper than six feet). Lakes are mapped separately from wetlands.

VLD Trough wetlands are peatlands. They often support a bisecting stream. Because the adjacent glacial sediments are coarse-grained cobbles and gravels which allow rapid groundwater transmission, VLD Trough peatlands are often fens, at least toward the east. They should receive ample shallow groundwater discharge to near the surface. Accordingly, they usually show somewhat higher pH and relatively small seasonal water table fluctuations (Table 1). 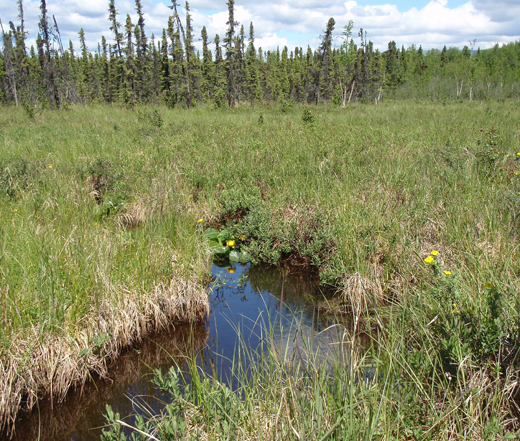 A shrubby VLD Trough wetland with a central stream southeast of Seymour Lake, in the eastern portion of the Meadows Lakes area 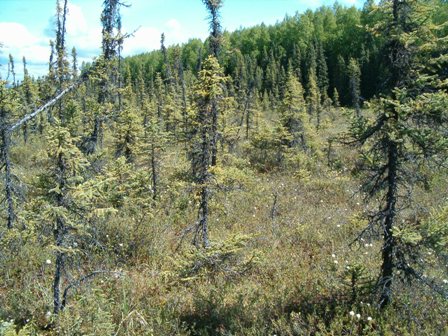 NWI and HGM
VLD Trough Wetlands are palustrine wetlands in the US Fish and Wildlife Service’s National Wetlands Inventory classification. They contain a variety of plant dominants from herbaceous emergents (PEM) to shrubs (PSS) and forest (PFO), with hydrologic regimes ranging from saturated through permanently, semi-permanently, and seasonally flooded (PSSB, PEMH, PEMF and PEMC, respectively).
In the LLWW classification of Tiner (2003) they fall into two major types; those along streams are Lotic Stream Slope/Flat throughflow headwater wetlands and wetlands away from streams are mostly Terrene Slope/Flat groundwater-dominated throughflow headwater wetlands.

Box plots of Plant Prevalence Index (PI) in common wetland mapping components. VLD Trough wetlands (highlighted in gray) mapped with lower hydrologic component values (RT2 vs. RT4for example) have lower values for Plant Prevalence Index. Prevalence Index is a good proxy for water table position and variability. Lower values indicate a water table closer to the surface for a longer portion of the growing season. An Index value equal to one indicates that the plot supported only wetland obligate plants (occur in wetlands greater than 99% of the time under natural conditions). A Prevalence Index value greater than 3 suggests that the plot may not be a wetland for jurisdictional purposes. Peatlands in V:LD Troughs generally have lower values for PI indicating a steady supply of ground water flow, which maintains the water level close to the surface.

Box plots of specific conductance (SC- blue) and pH (brown) in the common geomorphic types. A few values for specific conductance greater than 300 micro-Siemens/cm are not shown. Wetlands in VLD Troughs have relatively high values of SC and pH; between common values found in Kettles and values in Drainageways indicating that ground water discharge is a relatively important source.