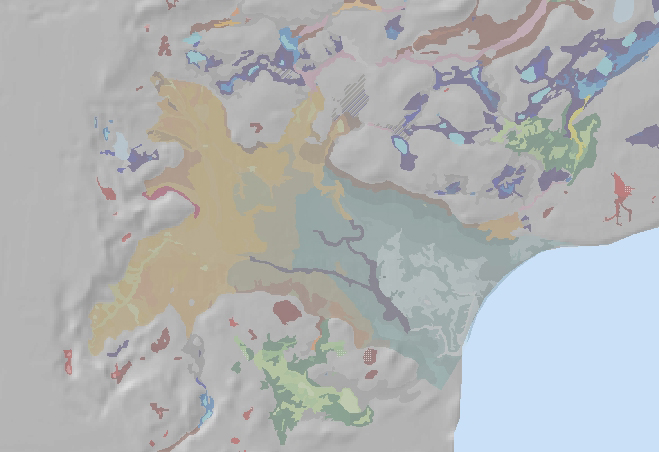 A shaded relief map showing the tidally-influenced wetlands in Goose Bay, on the western shore of Knik Arm

Tidal ranges vary daily, monthly, annually and on an 18.6 year cycle. The highest tide recorded in Knik Arm was 34.86 feet at 4:12 AM on 6 November 2002, although during some years the tide never exceeds 33.5 feet (NOAA, 2007; referenced to Mean Lower Low Water). Therefore, during some years the tide barely influences a zone from about 33 feet to 35 feet. This two foot elevation distance can cover a large area over the gentle gradients encountered in the Palmer Hay Flats and Goose Bay Refuges.

Tidally-Influenced Drainageways support an extremely broad gradient from fresh to saltwater controlled by multiple processes. Salinity can be as low 4 PSU in upper Cook Inlet (KABATA, 2005). Average seawater salinity is about 35 PSU (practical salinity units, or grams per kilogram of seawater). Freshwater from two sources dilutes salinity, and high tide residence time is of short duration.

The first source originates from glacially-fed river systems. These systems input large amounts of freshwater during the growing season. River water dilutes saltwater through sub-surface processes as well. A zone of shallow groundwater lies adjacent to all stream and river systems, and can extend for more than a mile (the hyporrheic zone). The hyporrheic zone is where river water moves below the surface, through adjacent sediments. High flow in broad, low-gradient valleys with permeable sediments, as found in upper Knik arm, results in a wide hyporrheic zone.

In addition to hyporrheic water, a large amount of groundwater is discharged from the permeable deposits underlying much of the area between Palmer and Houston (Jokela, et. al., 1991). In Goose Bay this discharge appears to float a layer of peat about one meter thick, over a lens of water 4 meters deep. The surface elevation at the highest point is about 40 feet, well above the range of the highest recorded tide. The surface of the strongly gleyed mineral soil beneath the floating peat lies at about 30 feet, near the level of mean higher high water (29.16′), indicating almost monthly intrusion of saltwater. The water near the surface is dilute; the average specific conductance of five surface water measurements at the high point on the mat was 135.3 µS (25°C; Table 1), close to values commonly encountered in local streams.

Already diluted saltwater (by both surface and groundwater inputs) is further diluted during the ample time between tides. The uppermost zone is inundated by only the highest tides of the 18.6 year cycle. Additionally, the highest tides often occur outside the growing season. These factors of the high variation in tidal range, timing, low initial salinity, high groundwater discharge, and hyporrheic input of the large river systems combine to support plants not normally considered halophytic (salt-loving), including balsam poplar forest, over soils indicating periodic tidal inundation.

Map unit names are made of combinations of map components. A suffix ‘c’ idicates a created wetland, and a ‘d’ indicates a highly disturbed wetland.

DWT/TDW2: Water table near the surface most of the growing season, often dominated by sedges.

DWT4: Dominated by bluejoint reedgrass. (only present as a component in a single complex polygon)

DWTR: A complex of more than two non-consecutive components. Often a narrow water course fringed by shrubs and forest.