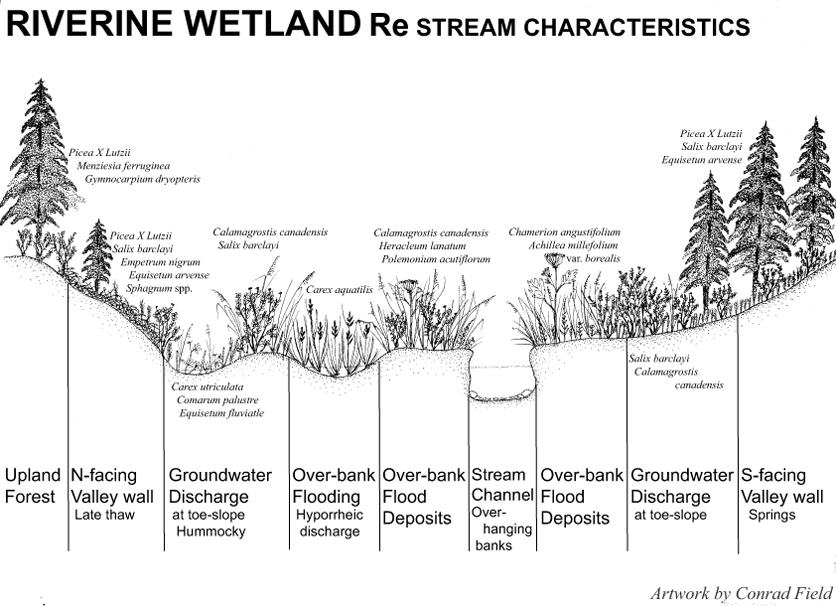 An idealized cross-section of an Re stream valley showing key characteristics and typical plants of local underfit streams. Drawing by Conrad Field.

Range of wetlands mapped as Riverine.

Riverine wetlands lie adjacent to rivers and streams. The Cook Inlet Classification uses a modified version of Rosgen & Silvey’s classification (1996) to name these wetlands. Level I of Rosgen’s system has seven classes, four of which are common on the lowlands: Types B, C, D, and E (Fig. 1):

A fifth type, DA, is used to describe a small, multiple channel stream reach and associated wetlands as the reach fans out onto a glacial terrace, usually in a peatland.

Steep, entrenched A stream reaches, with rapids, waterfalls, and narrow associated wetland margins, occur along a few streams flowing into Kachemak Bay, such as McNeil and Falls Creek.

Many streams originate as moderately entrenched B reaches. The dominant B types at level II in Rosgen’s classification are B4, with moderately steep valley walls and beds dominated by gravels, and B3 where cobbles dominate the bed material. B reaches have very narrow wetland fringes, if at all. 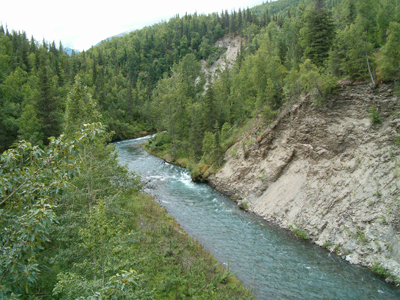 A wide B reach, the East Fork, along the Seward Highway. Fringing wetlands are absent, or very narrow.

E reaches occur on relict glacial lakebeds or within wide valley bottoms that were eroded by large amounts of glacial meltwater at the last glacial maximum. A good example of an E reach is the upper portion of the Ninilchik River, which flows along a glacial terrace. The unnamed creek between Palmer and Wasilla that orginates near Memory Lake and disappears into gravel near Vine road is another good example of an E reach. The most common reach types are E3 and E4 at level II in Rosgen’s classification, with cobble or gravel beds, respectively. E reaches often have wide wetland fringes, fed by overbank flooding, groundwater discharge along the valley walls, and discharge of hyporrheic flow. Hyporrheic flow is the shallow groundwater flowing immediately beneath and adjacent to the channel. It can extend many meters to the sides of the stream.

E reaches are classified into four sub-types based on channel sinuosity and form (Fig. 2): 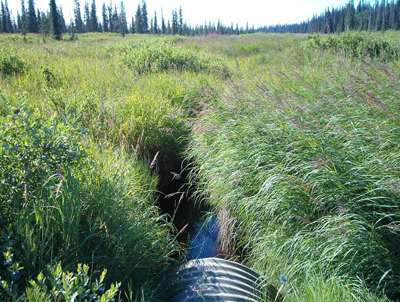 An underfit E stream reach emerging from a culvert in a wide valley near Clam Gulch.

C reaches are the probably the most familiar model of rivers, with cut banks eroding at the outside bends, point bars forming on inside bends, and wide active floodplains. Many C reaches in Cook Inlet Basin lie in underfit valleys, but still support wide active floodplains. Many portions of the floodplain do no meet wetland criteria today, but the stream will eventually meander to every part of the floodplain. Wetlands on the floodplain are abandoned oxbows, fed by hyporrheic discharge or overbank flooding, or they are fed by shallow groundwater discharge at the toeslopes of the valley walls. Uncommonly, some wetlands adjacent to C reaches are relict abandoned meander terraces, which were formed when the river drained a glacier at the end of the last glacial maximum and are now peatlands situated on terraces above the modern floodplain. The lower portion of Willow Creek has several such features. 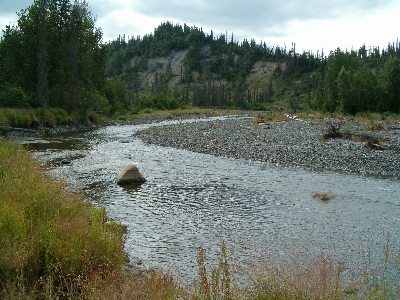 A C stream reach, Deep Creek near its mouth, a point bar has formed on the other side of the channel.

D reaches are large braided systems fed by glacial discharge. These reaches form aggading braidplains, and are very different from the meandering C stream model of cut banks and point bars. Aggradation can be extreme, especially on the braidplain of the Ressurection and Salmon Rivers near Seward where single flood events can raise portions of the plain a meter or more above the previous base level. Braidplains are extremely active, and often are sparsely vegetated but they do support less active floodplain wetlands along their margins. A braided thread of the river channel can potentially shift its flow to any portion of the wide braidplain. 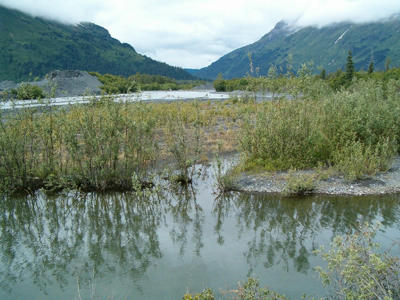 A braided D reach, the Ressurection River, in Seward. The sparse willow vegetation can potentially be replaced by a flowing channel thread at any time following a high flow event.

pH and specific conductance are measured in the stream with a YSI 63 meter calibrated each sample. The values for Re_ streams include Res, Rel, Reb, & Rea. These values are heavily weighted toward Matanuska Valley streams where a combination of population density and the composition of underlying rocks may contribute to higher values for specific conductance there.

Plant Prevalence Index calculated based on Alaska indicator status downloaded from the USDA PLANTS database, which may use different values than the 1988 list.

Riverine wetlands are the same as the Riverine classification in the US Fish and Wildlife Service’s National Wetland Inventory (Cowardin et al 1979). Riverine 3, (upper perennial) is the most common NWI type on the lowlands, these reaches have fast velocity, gravel to boulder beds, and little floodplain development, corresponding to Rosgen’s (1996) “B” streams. R2 (lower perennial) rivers and streams are also common. These are low gradient, slow velocity “E” and “RDA” streams, although, unlike typical NWI R2 streams, floodplains may be poorly developed and oxygen deficits probably never occur. Stream-adjacent wetlands are found near braided glacial rivers which in NWI these are intermittently flooded PSS/EMJ Palustrine shrub/scrub and emergent wetlands.