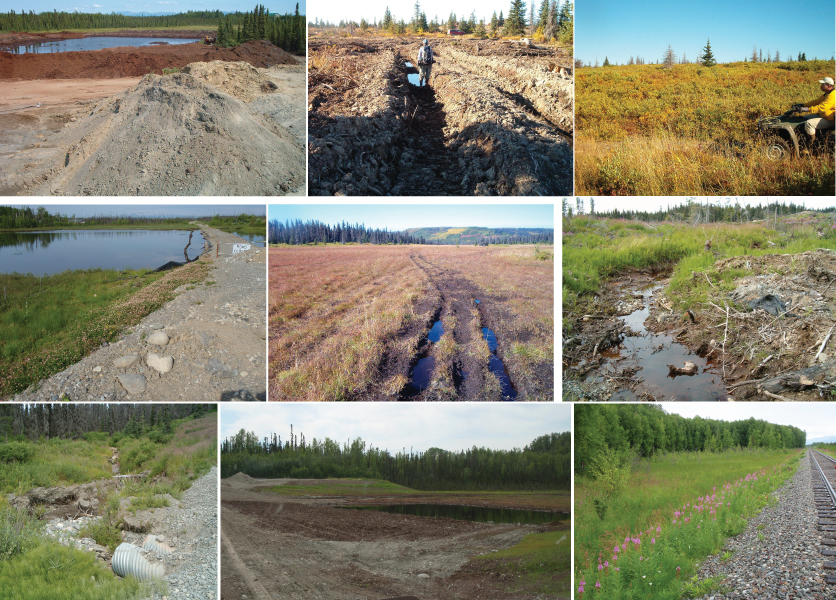 Examples of common causes disturbance in wetlands in Cook Inlet Basin. Disturbance ranges from ATV traffic, to excavations, to logging and linear transportation corridors such as driveway access and the Alaska Railroad.

Range of wetlands mapped as Disturbed or Created.

Disturbed Wetlands are mapped three separate ways. 1) A wetland that cannot be classified into any of the categories described on this website because the disturbance has obliterated any evidence of the natural wetland is mapped as DISTURB. 2) Wetlands that largely retain their natural character but have substantial fill or other disturbance on at least 10% of the wetland are mapped according to the classification but a ‘-d’ suffix appended (e.g. K4d is a disturbed forested Kettle). 3) Created wetlands are also mapped according to the classification, but ‘-c’ is appended (e.g. a pond that has been dug in surrounding uplands is mapped as a D1c).

All wetlands are disturbed by human activites. These disturbances range from the very subtle to the very obvious; from increased atmospheric concentration of carbon dioxide leading to different growth effects on different plants, to the placement of large amounts of road fill. However, most wetlands in Cook Inlet Basin are realtively pristine. Wetlands with relatively small amounts of disturbance such as a few ATV tracks or a powerline crossing them, are not mapped as disturbed.

Neither of these classifications has a category specifically describing disturbed wetlands.

d suffix– A wetland that can be classified, but has at least 10% of its area impacted by fill or excavation activity