We have volunteer opportunities year-round and can always use an extra set of hands. Call us at 907-260-5449 for more information.

Strategically, our restoration focus is to reconnect inland salmon nurseries to the ocean. While we don’t have many hydroelectric dams on the Kenai Peninsula, we do have a large number of roads with poorly designed or maintained culverts that prevent adults and juvenile salmon from accessing the habitat they need. There are dozens of culverts that need our help and we are discovering more through our Culvert Assessment project. Other organizations are focusing their efforts on direct bank habitat and providing responsible access, and we believe it is important to provide the most amount of restored habitat per dollar spent – and that opportunity is found in restoring fish passage.

We will occasionally take on a larger restoration project when conditions are found to warrant our expertise. One such example was the Anchor River where a the river was captured by a gravel pit, creating an unnatural and detrimental condition for salmon. We were the only local organization with the skills to tackle such a large scale effort. 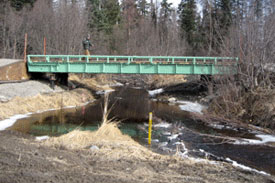 In the early fall of 2005, several hundred adult salmon returning to spawn were blocked by the culvert. KWF removed the culvert and replaced it with a bridge in Spring 2007.
Learn more about Leif Creek (Nikiski) 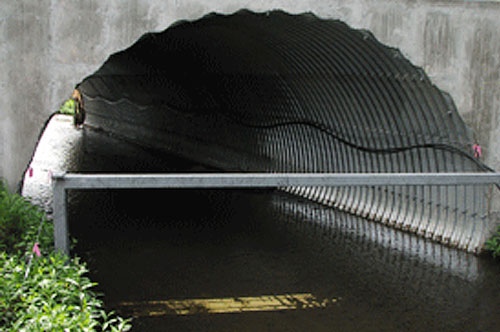 In the summer of 2003 and 2004 the Kenai Watershed Forum (KWF) more closely evaluated each of the three problem road crossings. It was clear that the College Loop Road presented the greatest potential to block juvenile anadromous fish.
Learn more about Slikok Creek

The culvert at this crossing had been so badly crushed that parts of it were sticking up through the road surface and it was too narrow compared to the normal width of the stream. To avoid the jagged culvert, drivers were illegally trudging through the salmon stream, destroying habitat for spawning and rearing.
Learn more about Daniel’s Creek (Nikiski)